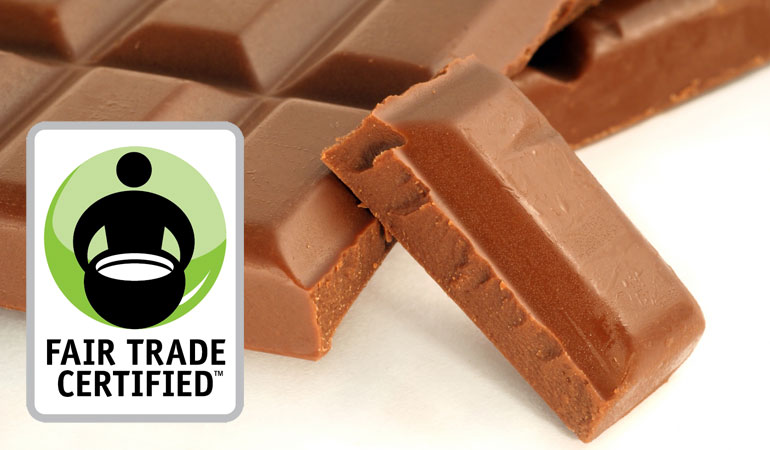 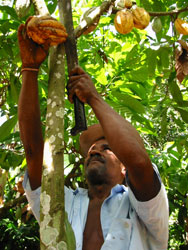 Although Fair Trade chocolate may be a relatively new movement, the conditions that it tries to prevent are not.

When you take a bite into that luscious chocolate bar, source of ecstatic pleasure, do you stop to think about who grew the cacao that made your chocolate fantasy possible? Possibly one of the more than 15,000 child slaves working on cacao farms in west Africa. Does that chocolate still taste good?

By the way, did I mention that cacao farming has stripped the world of hundreds of thousands of acres of rainforest? Or, that despite the fact that the U.S. alone spends $13 billion a year on cocoa products, many cacao farmers are impoverished?

The statistics are sobering, yet large chocolate manufacturers still insist that, because of the way cocoa is traded at global markets, it is impossible for them to tell which cacao is grown by slaves and which isn’t. Estimates are that up to 40% of cocoa is slave grown. And you thought Abe Lincoln abolished slavery.

Rather than horrify you further with statistics (which hopefully isn’t necessary – hopefully you’ll have already decided that you want no part in promoting such an industry), here are a few options for you.

How to Support Fair Trade Chocolate

1) Look for products that are certified Fair Trade chocolate. When farmers and laborers are paid a fair price for the products they produce, rather than being exploited for cheap labor, that is considered “Fair Trade.” Because they are paid a fair wage, producers can avoid cost-cutting practices that sacrifice quality and are destructive to the environment. For example, Fair Trade chocolate is typically organic and shade-grown, meaning it is grown under the canopy of the rainforest rather than in a clear cut field.

2) Limit, or stop, your consumption of mass-market chocolate. I know that may be hard if you have an addiction to, say, Snickers. All I can tell you is that after having once visited a banana plantation, wherein the workers lived in desolate concrete block houses and worked in the scorching heat, with giant billboards on every corner warning about what to do when overcome by pesticides, I swore to myself never to eat another non-organic banana.

If I am even tempted to, which I’m generally not, all I have to do is put myself back on the banana plantation. Try picturing your favorite 12 year-old working under the grueling African sun and being beaten all day so that you can enjoy your cheap candy bar, and that will make it easier to give them up.

3) Demand that your chocolate manufacturers and elected representatives take action to ensure that cacao is produced without slavery. Learn more about how to do this by visiting Global Exchange, an organization that offers many ways to help ensure fair labor standards worldwide.

4) Buy organic. Organic and Fair Trade chocolate really go hand in hand, and you will find that many organic products are Fair Trade and vice versa. Hopefully it already makes sense to you that spraying crops with pesticides and then harvesting and consuming those crops means you are eating pesticides. Yum! So that’s one reason to buy organic. Also, because organic farms are routinely inspected in order to maintain their organic certification, it is more difficult for them to exploit their workers without it being noticed.

Another reason to buy organic is that organic cacao is typically shade grown, meaning it is grown under the canopy of other rainforest plants rather than in deforested swaths. Cacao plants actually do much better in shade. It’s their natural environment, and the small flies and midges that fertilize the plants only exist in the detritus found littering the rainforest floor. Shade grown cacao is much more resistant to disease. Top that off with the greater biodiversity found on an organic, shade-grown cacao farm versus a deforested plantation.

Plus, it’s just prettier! If you have ever seen a deforested plantation and then a shade-grown plantation, you’ll notice the difference immediately. In fact, on a trip to Costa Rica, I drove by several shade-grown coffee plantations without even realizing they were plantations! Someone had to point it out to me.

5) Support the efforts of the World Cocoa Foundation, whose mission is to support a sustainable cocoa economy through economic and social development and environmental conservation in cocoa growing communities.

6) Adopt a chocolate tree! Support the efforts of The University of the West Indies, whose International Cocoa Genebank is working to preserve the world’s wild cocoa varieties.

You can purchase Fair Trade chocolate and organic chocolate products from the following conscious manufacturers:

Green and Black’s (whose “Maya Gold” bar, which is delicious, was the world’s first Fair Trade chocolate bar)
Dagoba
Divine
Equal Exchange
These are just a few of the many companies who insist on quality chocolate.

You can make a difference to the future of Fair Trade chocolate, one bite at a time.